First clip was a few hours before the main assault, when I took off on my todd to try to intercept a raid heading for France (while the escorts were on their lunch break it seems

), second clip is the first big raid heading for England that Voodoo and I Intercepted with some other allies while Speedy, Dezey and Greg were coming from England, and the third clip is the five of us attacking the bomber force on the way to England in the second big raid, after some of their escorts were engaged to the east by the previous wave from the continent.

You should put that in the hanger 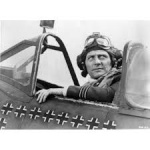 Nice shooting Mj, those 111s can soak up our 303s. Interesting approach on that 1st clip but still smoked his engine. Think I caught a climpse of me making the only pass I managed before being chased off by 109s. Its definately a different kettle of fish up there very easy to lose sight of the target I found. And yes def post it in the forums !

Taa, I have posted it in the Hangar and in the Allied Forums too.

As for the first clip, my original plan was to try to keep my speed up by flying slash attacks on the 111s, as I thought the escorts would be down on me in an instant (I knew there was at least 1 109 right above the 111 formation, you can see the grey circle at the start of the clip when I look up) - and I highly doubted the survivability of a single Spitfire flying level behind the lead Heinkel firing a long burst into it - but as it turned out the escorts (I saw two in the end, but aparantly there were 3 with that flight) were very slow to deal with me so I was able to get a good burst off then dive away just as they got their act together and tried to bounce me.

If I'd just flew at the lead bomber, sat behind him and fired off all my ammo into his wings he probably would have gone down, but nine times out of ten if I'd tried doing that against an escorted RDP flight I'd have been brown bread.