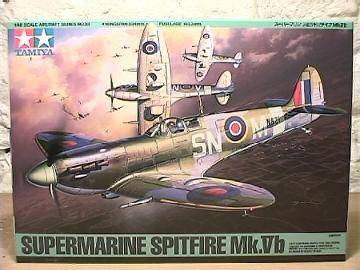 Photo-Etch Cockpit and other Detail set 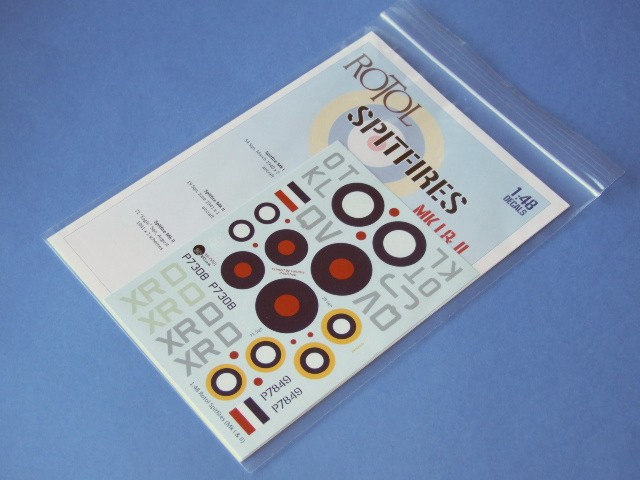 I'm reliably informed that a Spitfire Mk.IIb is basicly a Spitfire Mk.Vb with a Rotol prop and flat engine exhausts (I'll try to file the standard ones down, or get some resin Spit I exhausts if that doesn't work.)

There's also a Spitfire Mk.I control surfaces kit (as the IIb has fabric covered ailerons) but I want to have a look at the normal kit before I think about getting them (also not sure I can trust myself to go cutting bits off the kit.

Was also thinking about getting a detailed resin cockpit set, but seems a bit pointless when I've got a photo-etch cockpit set in the pack for the standard cockpit.

Going to be modelling it with the Canopy and Cockpit door open, so will actually be able to see the Cockpit in this one!

And yes, if the Spit V kit comes with Pilot seat rear armour I'll be cutting it, sanding it and otherwise destroying it with fire!

The kit and the extras arrived a few days ago, and I've been working on the cockpit since then, which is now near enough finished:

A few comparison shots first to compare the standard cockpit parts with the parts in the photo-etch pack:

On the left is the Pilot's chair made completely out of photo-etch parts, on the right is the standard plastic part from the kit:

The ironic part is that after about mid 1940, the chairs in Spitfires were made from a plastic mix - so I'm making a metal aeroplane out of plastic, with its plastic chair made out of metal!

Next is bits of the rear cockpit frame being replaced by photo-etch:

Don't mind the manky bit on the left - that's where I tried to open up the three holes in the frame that were filled in, which ended in tears! Thankfully you can't see it in the finished product as the armour plate is in the way, plus it's on the opposite side of the cockpit from where the open door is anyway.

Next up is another comparison with the chairs, this time with the finished photo-etch one and all the trimmings - I decided to paint the backing of the chair black to liven it up a bit, most of them were painted all brown, but some had black or green covers instead:

The photo-etch harness make my Bossie seat belts look crap it must be said.

Next up is the instrument panel (minus gunsight):

I have to confess that the dials were pre-painted photo-etch, also - although the picture is a bit blurry, I can confirm that the bottom tank is out of fuel - the heading is about 110 and it's probably about 10 past 5 (first light?)

Next is the rear cockpit frame, with the Pilot seat armour in place (note, however - the lack of any head rest armour plate!)

Easy to weather photo-etch, you just scratch the thing until the metal shows up.

Next up are some pictures of the finished cockpit, but the image quality is a bit poor I'm afraid.

I tried to put the undercarriage lever in the down position, but it ended up more up than down, which may result in some issues! Also the stick is all the way forwards, so I might cut the elevators off and stick them on in the down position (I think they should naturally be down if you don't use a control lock anyway - not that I'm being nerdy about it or anything...

T'other side of the cockpit (minus the door):

In the real thing the harness went out of the back of the chair and connected to some wires leading to the rear fuselage I think, but I had nothing to connect to in this, so just glued the end to the back of the armour plate.

The radiator control lever on the left of the seat is a home made addition, as the kit didn't have one for some reason.

And last but by no means least - a picture of the instrument panel and the photo-etch gunsight:

The bits that are photo-etch are:

There were some other bits that I left out as well, there were some replacement rudder pedals and a bar that goes at the back of the rear frame - plus an instrument panel fuel switch - but those were just way too fiddly!

Also a replacement for the stick trigger and brake lever, but I preferred the kit version - and of course the head rest armour plate.

And having done my first bit of photo-etching, I can confirm that it's bloody hard work!

Now for the most abused pair of Spitfire wings you've seen since the Skipper last decided to play chicken with a tree!

The changes from the standard kit are:

Removed/sanded the two wing strengtheners above the wheel well
Removed the metal ailerons and replaced them with resin Spit I canvas covered ailerons
Replaced the standard 20mm cannons with brass 20mm cannons (one of the original ones snapped off and has been wonky ever since, so decided to get some new ones!)
Removed the flaps from the lower half of the wing and glued on the top of the photo-etch flap set.

The bottom of the wings look even more abused but thankfully they're on the bottom, so you won't really see them much on the finished kit:

I'm hoping that the paint will hide a lot of the mankyness like the sanding on the wing strengtheners and the scratches here and there - although I still need more filler or some such where the cannons connect to the wings (could maybe try putting some glue in the gaps and hope it dries in the gaps?)

also the little flap/door at the back of the top side of the wing (the little rectangle with a triangle top - about 2/3rds of the way to the wing root) is meant to be open when the flaps are deployed to give the Pilot a visual sign that the flaps are down - but cutting those doors out is a bit too fiddly - so I think I'll paint them 'cockpit green' or black, then glue the photo etch open versions on top, so that it looks like it's open even when it's just the open door glued onto the closed one

A few pictures of the current progress, as I've glued the main parts together and painted the (black) primer on:

Looks better now that all the bits are the same colour at least! You might notice a little chip on the back canopy frame where I was a bit extreme removing an excess bit of plastic, but then again it is a warplane, FlaK damage, obviously.

I've put masking tape where the door should be, to try to stop any paint getting into the cockpit - also put some masking tape on the inside of the canopy, as it's not an paint-tight seal between the main canopy and the back part.

The little mark just behind of the access panel behind the Cockpit is for gluing the radio wires that lead from the fuselage to the end of the elevators.

In case you were wondering, I went for the armoured front glass with the old style cut out oval section (or what ever it is) on the main canopy - the same as the one in my Signature.) With the rectangle mirror.

The wing section didn't quite fit onto the fuselage perfectly, hence why the fuselage is raised slightly at the wing root - I think that's probably because of all the messing around I've done with the wings and flaps and all that. Also you can see the Coffman Starter bulge just under where the exhaust goes.

Elevators in the down position, thankfully they seem to match up - would look a bit naff if one side was more down than the other side.

Priming has gone better than it did on my Bossie, as on that it created a film which started to flake off in areas, revealing the clean model underneath - also I didn't paint it as thick, so the panel lines and the like are in better condition.
_________________